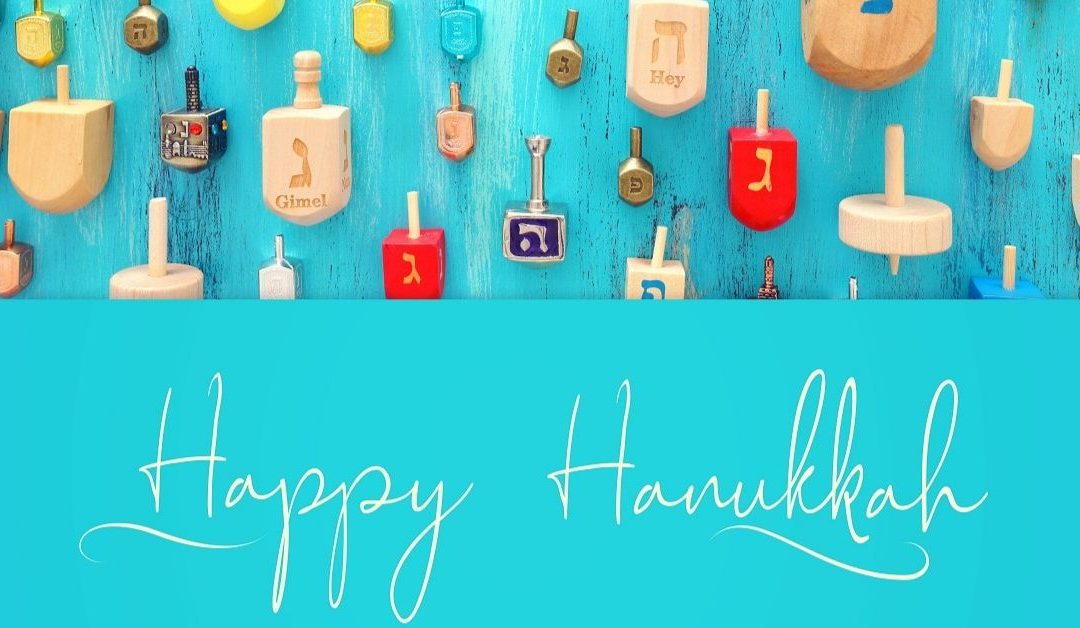 The Jewish Festival of Lights – spelled variously as Hannukah, Hanukkah, Chanukah, etc. – is a joyous Jewish Holiday. (The English spelling varies, because it is transliterated from Hebrew which has a different alphabet.) The holiday celebrates several miracles, but the most well-known is the miracle of the oil. After the Maccabee family led a rebellion against the Greek-Syrian king Antiochus in about 160 BCE, the Jewish people returned to Jerusalem and found their temple defiled and in ruins. They cleaned the temple and set up a menorah for an eight day celebration and rededication of the temple. Although they had only enough oil for one night of the celebration, by a miracle the oil lasted for all eight nights.

During the celebration of Hanukkah, people enjoy a game using a four-sided spinning top called a dreidel. S’vivon, the title of our Chorale song, and dreidel are the Hebrew and Yiddish words, respectively, for “turn” or “spin.” Dreidels have different sets of Hebrew letters. Outside of Israel the letters nun, gimmel, hey and shin, stand for the phrase Nes Gadol Hayah Sham, which means “a great miracle happened there.” In Israel, the last letter is pey and stands for the word Po, which means “here.” Like the dreidel used outside Israel, the lyrics for the song S’vivon refer to the great miracle of “Chanukah” happening “there,” i.e., in Israel. Our song urges the dreidel to “spin, spin, spin” to celebrate a holiday of happiness recalling the miracle of the oil that was not depleted.

The arranger for the version of the song presented by the Longmont Chorale is Darmon Meader. He is a highly respected jazz vocalist and saxophonist. Mr. Meader achieved international recognition as a founder and all-around musicologist of the New York Voices (NYV). This jazz group was founded in 1987 by five musician, four of whom were members of an Ithaca College alumni group that toured Europe in 1986. Both as a part of NYV and as a soloist, Mr. Meader has made numerous recordings of original and standard jazz works. He has numerous collaborations, including with the Count Basie Orchestra. Mr. Meader is currently an adjunct faculty member at the Indiana University Jazz Vocal Department. He is active as a clinician and guest artist at both the high school and university levels.

The Longmont Chorale is a nonprofit Longmont choral group, an SATB choir which performs four subscription concerts in Longmont each season in addition to other performances by our auditioned group, Viva Voce.

Sing “Joy to the World!”

Musical Gifts from Many Lands